Headmaster’s Blog – “We will realise your child’s potential…”

This is a common quote on every school website; see for yourself, go and have a look. I can narrow the search down for you, if you like, it will usually be in the Head’s introduction!

However, what does it mean? If every school is realising the child’s potential, then why do parents take hours of time and boundless amounts of energy choosing the school for them? Notwithstanding the external facilities, the ethos, philosophy and culture of the school, the focus has always been, “I want them to be the best they can be”.

But who knows what that is and how do we assess that for your child? By this I mean specifically your child, not the rest of the cohort – how do we realise your child’s potential? Let’s be honest, your child is at the forefront of your mind, and the rest of the children in the class… well, they are not yours, are they?

Realising potential means that some sort of talent has been identified, surely. The Eastern Block were renowned for this behaviour in the 1970s and 80s where their children underwent a significant barrage of tests to identify their potential, moreover, their ‘potential to contribute to the motherland’. They went as far as taking muscle biopsies of children to determine whether the fibres of the muscle predisposed the child to be a power or endurance athlete.

Moving on to the 21st Century, we saw headlines in 2014 where a 20 month old toddler was given a professional football contract, with Belgian club FC Racing Boxberg [i] – the world awaits to see if that proves to be successful…

Novak Djokovic, the elite tennis player who has been at the top of his sport for the majority of his 18 years as a professional, has a list of successes that is simply phenomenal; as is his tour winnings of over $145 million – he deserves respect. However, when one looks at his Foundation’s rationale for finding talented people, I raise an eyebrow and reconsider my position on his stance. “How do they become so successful?” he asks of talented children; the response is stark, “The answer is simple: they were gifted as children”.[ii]

I take objection to this and would argue that if you looked at other spheres of life, and indeed the tennis world, not all successful professionals would say they were born with talent. They would say that they had to work really hard at something they enjoyed doing. It was their persistence and drive to improve in something they were passionate about that led them to become so successful.

Malcolm Gladwell’s assertion[iii] that to become successful you need to undergo 10,000 hours of practice to realise it (in whatever field you choose) is a sobering and cautionary tale.

I can think of many people off the top of my head who would fall into this category; Michael Jordan, Ed Sheeran, I could even bring The Beatles into this category. Each would describe themselves as being passionate about their chosen field but The Beatles’ stint in Hamburg and Jordan’s drive as a professional to always be the best, were more important factors than their talents at an early age.

Jordan’s quote, displayed in many schools and children’s bedrooms points to a different foundation stone, “I’ve missed more than 9,000 shots in my career. I’ve lost almost 300 games. 26 times I have been trusted to take the game winning shot and missed. I’ve failed over and over and over again in my life. And that is why I succeed.”

Dwight Bain, a counsellor and psychologist from the Life Works Group, published an article on LinkedIn[iv] : “The Potential Plan – How to identify a child’s Talent early for a Lifetime of Career Success”. In it he describes as a 9-year-old he wanted to become a “Christian psychologist on the radio who helps people.” He asserts that he has achieved this through careful planning by his parents and that all parents should undertake such planning for their children.

I would argue that parents put opportunities in place for children and can influence the regular exposure to the activity, but the factors in becoming a success and realising the true potential is manifold.

In fact, parents in conjunction with teachers, are the people who ‘notice things’. In over thirty years of teaching, I can say that I see talent in the sporting domain better than any other area but other subject leaders would do that in their particular specialism. Writers, musicians, actors, the list is not exhaustive, have all been exposed to opportunities at school to develop their interest in a subject area that they enjoy and maybe show a degree of flair in… it is just the openness of the teacher to spot the talent and make the effort to create the pathway for them to look for success.

There is no magic trick to realising potential, in fact the steps are very simple;

1.      Talent identification – identify the talent in the child through exposure to a wide variety of experiences. It takes someone with knowledge and experience to pick this up and know when to ‘hand it on’ to the next stage of development.

2.      Self-selection – if the child likes the activities on offer, if they are enthused and enjoy their sessions, they will go back to it again and again. They will choose to continue.

3.      Interest – maintaining their interest is crucial; keeping the exposure positive but real will keep them ‘on the hook’ and they will be deeply immersed if, as parents, you show some interest in their development. However, this is where you have to be a parent and not a coach – learn to understand that you are not the expert in their chosen field (for the majority of society) but you are an expert parent.

4.      Hard work – this only comes about when they have a vested interest in the outcome; for some it will come through extrinsic motivating factors like kudos or prize funds, for others it will be intrinsic and these will probably show greater success in the longer term. Sir Chris Hoy revealed that he had a seismic shift in his performances when he realised that he was being paid to do something he loved, riding his bike, every day. Once he understood that, it was of no consequence what the outcome was [v] but we all know how successful he became.

So, if you want your child to be successful in their chosen field, select a school that provides the opportunities for them to be exposed to many experiences, inside and outside the classroom and then ensure the staff have the enthusiasm and ability to spot the potential, put pathways in place and feed their motivation. Then all you have to do is be a positive parent… easy! 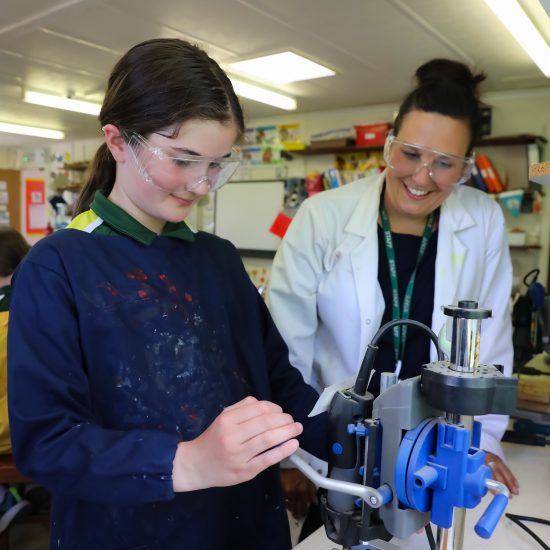